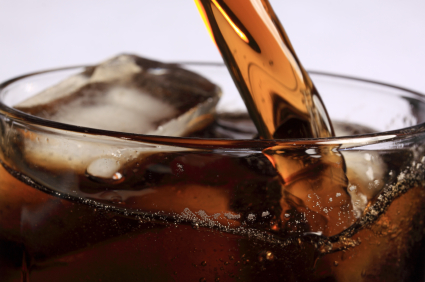 For the last 20 years, soda has been the leading beverage of choice in the U.S. It’s just lately fallen to second place—behind water.1 Finally!

But we bet if more people knew just how dangerous it is, there’s no way they’d still drink it.

If you don’t drink soda, you’re in a small minority. And you’re usually healthier than the average person. The majority of Americans consume 44 gallons of soda a year. That’s almost a gallon a week!

Health advocates, the Mayor of New York City, and even the state of California (whether or not you agree with their methods) are fighting to raise awareness of just how unhealthy and dangerous soft drinks are.

You probably already know how a drink full of sugar, high fructose corn syrup, and artificial chemicals hurts your health.

But there’s something else in some of those fizzy drinks that’s scarier. By far.

Colas contain a carcinogen known to cause cancer. It’s hidden in the caramel coloring. It goes by the name 4-methylimidazole (4-Mel).3

4-Mel is a chemical that forms during the cooking process.4 As a result, trace amounts of it are in many foods. Not just soft drinks.

California is the only state to make headway in the fight against the poison. In March, the state forced Pepsi Co Inc. and Coca-Cola Co. to change their formulas to decrease the level of coloring. This helped the soda companies avoid having to put a cancer warning label on their products.

To follow up, the watchdog group Center for Environmental Health tested Coke and Pepsi products for the carcinogen. They tested products from California and from across the country.

Their findings showed that in California the sodas were free of the toxic chemical.

But here’s the kicker… If you’re in any other state besides California and you drink Pepsi, the chemical is still there.

However, Coke in the other states had little or none of the chemical. Pepsi’s levels of 4-Mel are four to eight times higher than California deems safe.

Pepsi says they’re working on it and hope to finish in 2014.

We wouldn’t call any soda “safer.” It doesn’t matter what state you’re in or how much you drink. Soda is poison to your system even without the cancer-causing carcinogen.

Pepsi has defended themselves by saying the FDA and other regulatory agencies around the world consider their drink safe.

But as we know… the FDA considers a lot of things safe that are known to cause harm.

In fact, the FDA said last year that someone would have to drink over a thousand cans of soda a day to reach the toxic level. Looks like to us they’re justifying the consumption of a chemical they know causes cancer.

Pepsi containing 4-Mel should be just one more reason for you to pass on it. In fact, pass on any soft drink. It’s not worth your health or your life to drink something that’s so poisonous even without the carcinogen in its caramel color. California isn’t any better off if they’re still drinking soda.