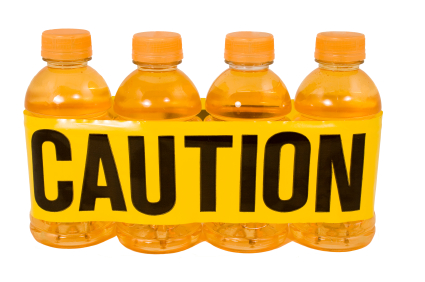 More endurance… More performance… Better hydration…. That’s what you get when you reach for a Gatorade. Or at least that’s what they say.1

But take a look at the label. It’s nothing but a sugared sports drink with synthetic chemicals.

After numerous customer complaints and even a petition by a Mississippi teenager, Gatorade is removing the ingredient brominated vegetable oil (BVO) from its drinks.2

Gatorade says BVO is used as an “emulsifier.” In layman’s terms, it helps distribute flavoring evenly so it doesn’t collect at the surface.

Okay, so that’s the explanation we get from the people who make and sell Gatorade. But what is BVO really?

BVO is a synthetic chemical used as a flame retardant. That sounds like more than just “flavor distributing.” Japan and Europe have already banned it.

Consumption of bromine-containing sedatives has been linked to emergency room visits.3 And that’s not all… reported side effects include depression, memory loss, hallucinations, seizures, and many, many more.

Molly Carter, a spokeswoman for PepsiCo Inc.—which owns Gatorade—said the change has been in the works for the past several years. But not because they want or need to make their product safe. It already is, according to them.

Carter also said it wasn’t because of the teenager’s petition that received more than 200,000 supporters. Then why? Because of “rumblings” from consumers and Gatorade’s wish to specifically address their customers’ concerns.

The new version of Gatorade is supposed to hit stores in the next few months.

But is it really an improvement?

SAIB is another emulsifier. It’s also just another unnatural sugar additive. So basically Gatorade is swapping one synthetic chemical for another.

And it doesn’t have the best reputation either. One study in dogs linked SAIB to increased liver size and bile production.4 The FDA and the World Health Organization say the additive is safe at up to 20 mg a day.5 And the FDA supposedly regulates the amount used in beverages.

But we wouldn’t list the FDA as one of our most trusted sources.  Not by a long shot.  Bottom line: neither BOV nor SAIB are natural additives. And both have sketchy backgrounds. We recommend you steer clear sports drinks all together. The high sugar content alone is reason enough to ditch them.

There are far safer, healthier choices. Coconut water is one. Compared to the popular sports beverages Gatorade and PowerAde, it contains five times the amount of potassium. It also has all the electrolytes you need in the perfect ratio.6 But the best part… Natural sugar and no artificial colors or flavors.

Gatorade with or without BOV is still not the best option. Plain water or coconut water will quench your thirst and hydrate you.