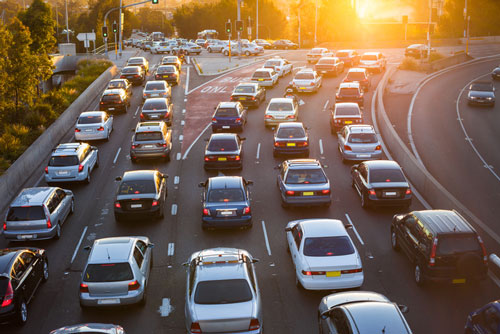 This is an important question, since air pollution causes more than 200,000 early deaths in the U.S. each year. And car exhaust is the biggest culprit.1

Engineers at Washington University in St. Louis wanted to find out if they could mitigate the risk from air pollution while commuting.

They installed sophisticated pollution-measuring sensors inside and outside of their cars. They also installed dash cams to record traffic density, time spent behind buses and large trucks, and idling at stoplights.2

Anna Leavey is a research scientist at Washington University’s School of Engineering. She is coauthor of the study.

“We know that traffic generates a lot of pollution. And therefore it’s the time when you’re traveling in traffic that you can have a disproportionately high amount of your daily exposure to many harmful pollutants,” she said.3

Leavey and her colleagues collected data for four months during their daily commutes to and from campus. They tested different ventilation conditions, opening and closing windows, and changing climate control settings.

They found the best way to reduce pollution inside their cars was to drive with the windows closed and the air conditioning on.

“Driving with your air conditioning on and windows closed is the most protective thing that you can do,” said Leavey.

The dirtiest air inside the car was when the windows were open and the fan on.4

Why Running the Fan Doesn’t Help

Why does air conditioning work better than the fan or heat to remove pollution?

Study co-author Nathan Reed is a Ph.D. candidate in the university’s Department of Energy, Environmental and Chemical Engineering. He explained:

“The AC is pulling outside air, and running it through the same filter with the same ventilation path as the fan. But there’s one difference: When the AC is operating, you have a cold evaporator that is cooling the air as it passes. This cold surface attracts the pollutant particles, and they deposit there, as opposed to diffusing it into the air you’re breathing.”

The researchers found it was best to close windows in congested traffic to keep fumes outside. But in sparse traffic, it’s best to open them to let in fresh air. The study was recently published in the journal Atmospheric Environment.5

To further protect yourself against air pollution, do one more thing… Make sure you’re getting enough vitamin B.

Columbia University researchers found that air pollution damage to health was “nearly reversed with four weeks of vitamin B supplementation.”6

The study participants took 50 mg of vitamin B6, 2.5 mg of folic acid (vitamin B9), and 1 mg of vitamin B12 daily. A quality B-complex formula should do the trick.