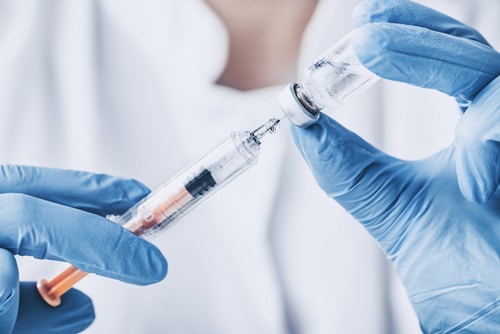 The ineffectiveness of the flu shot has long baffled researchers.

In the lab it works great.

In real life? Not so much.

A review of 51 studies found no evidence that the flu shot is more effective than a placebo. Other studies show the vaccine doesn’t work for over 80% of adults.1

It is especially ineffective in seniors, the people who need it the most. People 65 and older are hardest hit by the flu, suffering the most deaths and hospitalizations.

The CDC and drug companies have long blamed the shot’s low efficacy on the fact that the flu virus rapidly mutates. This means that the flu strain in the vaccine sometimes doesn’t match the strain that is in circulation and making people sick.

But in recent years, even when the vaccine was a good match, it hasn’t worked well. Scientists haven’t been able to figure out why.

Now, a new study may have finally solved the mystery.

The flu shot is made by injecting influenza into chicken eggs. The virus reproduces inside the eggs. Virus-laden fluid is then harvested.

After that, the virus is killed. From there it is purified and further processed before going into the vaccine.

Researchers from The Scripps Research Institute (TSRI) in La Jolla, Calif., investigated exactly what happens to the virus when it reproduces in eggs.

They found that the virus mutates as it divides inside eggs. It changes to adapt to living inside chicken cells. This mutation disrupts the proper creation of a protein needed to trigger an immune response in humans.3

“Vaccine producers need to look at this mutation,” said Dr. Nicholas Wu. He is a TSRI researcher and an author of the study.

Study co-author Ian Wilson, a professor of structural biology at TSRI, explained: “Influenza viruses produced in eggs have to adapt to growing in that environment and hence generate mutations to grow better.”

This leads to “low influenza vaccine effectiveness,” the researchers concluded.

There is a way to make a more effective flu shot. Two formulations that don’t use chicken eggs are Flucelvax and Flublok. But they are more expensive and can be hard to find. And it’s too late to make more of them in time for this flu season.4

And there’s more bad news… Last year’s flu season was a bad one. This is in part due to the vaccine being only 20-30% effective. This season looks like more of the same.

Not only does the flu shot fail in most people, it’s dangerous. Flu shots can contain toxic ingredients that no one should ever put in their body:5

The Vitamin That Stops the Flu

Instead of the flu shot, consider natural alternatives.

A study published in the British Medical Journal found that vitamin D is more effective than the flu shot. It not only protects against the flu, but also colds. And there are zero side effects.6

The study analyzed research from 25 clinical trials. They included 11,000 people. They found that taking vitamin D supplements cuts in half the risk of respiratory infections like flu and colds.

The researchers noted that most colds and flus occur in the winter when many of us have low levels of vitamin D due to lack of sunlight.

The best way to get enough vitamin D is to take a quality supplement. But make sure you take it in D3 form. Traditionally doctors have recommended D2 or don’t specify which form.

Here are four other ways to fight flu:7

Add about half a teaspoon of sea salt to a glass of warm water. Then gargle the mixture at the back of your throat for about 10 seconds before spitting it out.

Boost Good Bacteria: Up to 80% of your immune cells are in your gut. Without the right balance of bacteria, your immune system can’t function properly. Eat probiotic foods like kimchi, sauerkraut, and yogurt.

Get This Amino Acid: You need cysteine to make glutathione, which is a powerful antioxidant. Its supplemental form, n-acetylcysteine (NAC) cuts flu risk in half, according to an Italian study. It works well in seniors. Take a 600 mg NAC supplement each day.

Editor’s Note: There are 31 secrets that build your immune system… And we’ve put them all together for you in our report, Bulletproof Your Immunity: Easy Ways to Protect Your Health.